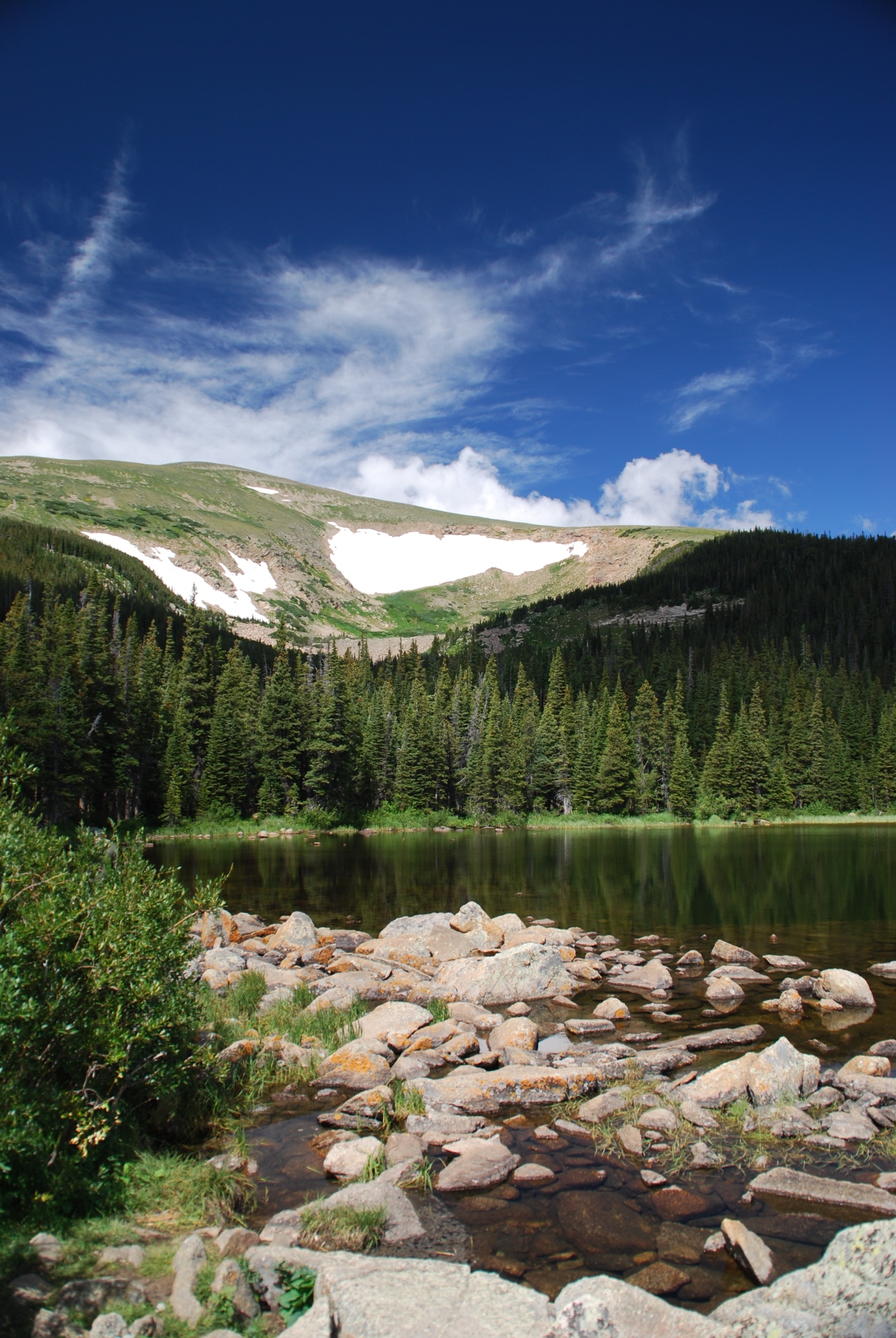 Comments: This is the second time we hiked (or tried to hike this trail). Our first hike was almost two months ago, the first weekend that the trails and campground was open. It was a madhouse. This weekend was much quieter: we were able to get a parking spot in the trail head lot, campground was not full, and there were fewer people dispersed camping along the road to the trail head.

We were actually hiking at 9:45. Out of the house by 9:15 and the road was much improved compared to two months ago. It seems like gravel was brought in and a road grader touch the surface to help reduce the bone rattling drive. We would actually think about bringing Abby up the road (if poor Abby was in running condition).

As with our first trip, the trail is still poorly marked and the multitude of social trails just add to the challenge. Following the trail was easier this time with the snow fields melted away and down trees cleared. We clearly saw where we lost the trail on our first hike and where the trail went. It is no wonder we lost it, two months ago it was covered with snow. With the snow gone it was little more than a goat path through some rocks.

As the trail heads down to the second lake, there is an option to take the second switch back and go to the lake shore, or continue on straight towards the third and fourth lakes. The distance between lake 1 and 2 is very close, it is a longer hike from lake 2 to 3, and lakes 3 and 4 are adjacent. There is a fifth lake close to lake 4, but we did not pick out the trail to head that way.

While we were dipping our toes in the frigid water of lake 2, fellow hikers shared the report of a moose sighting in lake 4. Alex, who desperately wants to see a moose, led the way. Unfortunately, we arrived at the lake after Mr. Moose had gone home to take a nap. According to Alex, Mr. Moose is a fan of Thomas the Train and was going to watch Thomas after his nap.

Alex was in a hiking mood and hiked the entire trail out and back. A great little trooper. This took us 3 hours to do the full loop (and we foolishly though we walked close to 2.6 miles the first time. Ha!). Considering the size of rocks Alex had to clamber over and that we stopped to dip our toes in a frigid lake, 3 hours was a good pace.

Ah, college kids: About 1/10 of a mile shy of the trail head, we saw a group of college kids heading up to the lakes to fish. One kid carrying a half dozen poles, another kid with a bucket, a couple kids carrying food/camp chairs, and the two poor souls at the end lugging up a cooler. Filled with ice (and beers?)? These poor souls thought the lake (and only one lake) was much closer to the parking lot than the 3/4 of a mile they had in front of them.

Other observations: Mushroom hunters! We saw several people carrying buckets and looking for mushrooms. When asked, one person said that it wasn’t the most successful forage she has ever done.

Would we return? Definitely. It was so much easier the second time around without the snow on the ground. It would be nice to find the fifth lake and perhaps see the moose. One should note, that these are small ‘lakes’ (ponds really). So if expectations are along the size of the Great Lakes, disappointment will abound.

Join 32 other subscribers
Follow Wandervogel with the McElvains on WordPress.com