We really enjoyed our time in Canada. In Banff National Park, we visited the Upper Hot Springs and hiked the Marsh Loop and continued onto the Sundance Trail. Parks Canada is kind enough to mark there trails as easy (green), intermediate (blue), and advanced (black). However, in some of the intermediate trail descriptions, the elevation gain over the length of the trail calculates to an average 10% grade. If a 10% average grade is considered intermediate, we would hate to see the trail that is marked advanced.

Despite hiking to the Sundance Canyon trail head, we did not hike the canyon due to time constraints. Overall the Marsh Loop was flat and easy walking. Horse tours use this trail, so be prepared to step to the side to allow horses to pass and to dodge road apples as you walk. The Sundance Trail (to the Sundance Canyon trail head) was paved and started out flat. Approximately halfway down the trail, the grade increased and remained consistent for the remainder of the hike to the Canyon. Be cautious of bicyclists coming down from the Canyon. 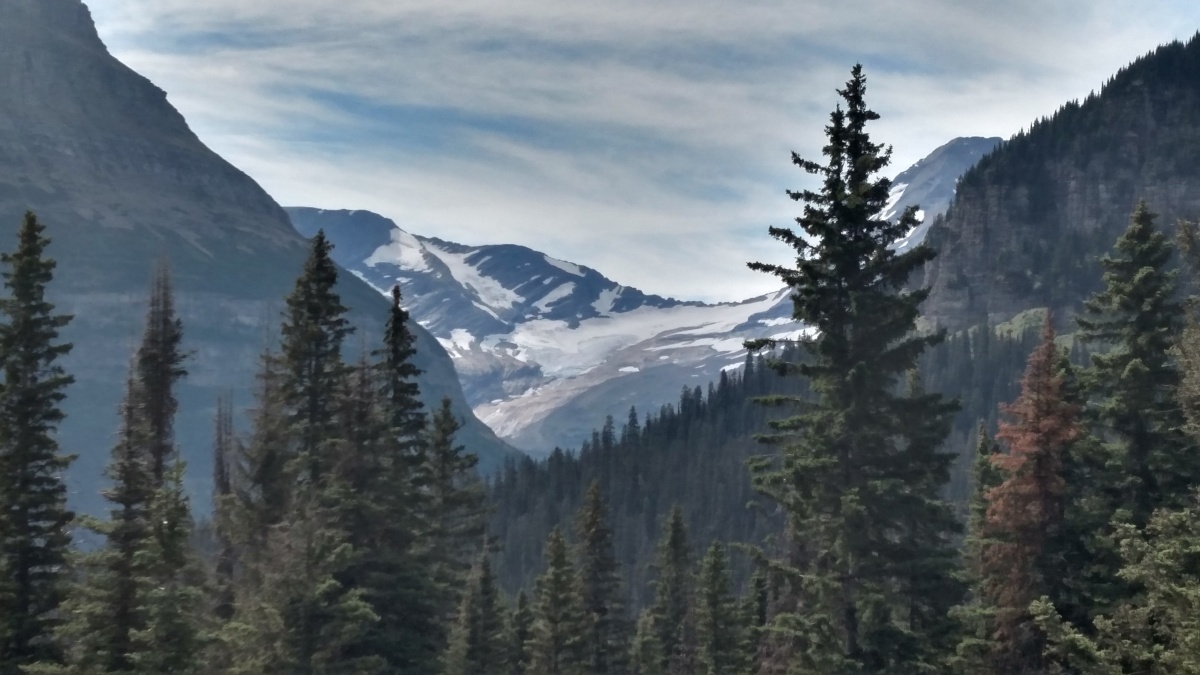 We learned that in Glacier National Park, the ‘crown of the continent’, there is a convergence of plants and animals from diverse environments. The ecosystems of the north (Canada), Maritime (Pacific Northwest), south (Southern Rocky Mountains), and east (prairie species) are found here, the narrowest point of the Rocky Mountain Chain. Water from the park flows to the Pacific Ocean (via the Columbia River), Hudson Bay (Saskatchewan and Nelson Rivers), and the Gulf of Mexico (Missouri and Mississippi Rivers); this convergence of watersheds also promotes the migration and dispersal of plants and animals. This environment is so diverse, all native carnivores – grizzly bears, black bears, wolves, and cougars – are able to survive. The abrupt transition from mountain forest to prairie supports a variety of herbivores – elk, deer, big-horn sheep, and mountain goats – which in turn allow the carnivores to survive.

Going to the Sun Road (driven in a rental car because Abby was too long and tall) provided an excellent example of the diversity that abounds in the park. Starting from the Apgar campground on the west side, we moved through areas that were reminiscent of the Pacific Northwest, which was exemplified by the Trail of the Cedars (handicap accessible board walk/paved trail). Ferns, under towering cedars, dominated the forest floor. As we climbed to Logan Pass, grass became more dominant and wildflowers (Indian Paint brush, bear grass) were in full bloom. We even saw a mountain goat. Over the pass, we pushed on to St. Mary, and the cedars were replaced by dense stands of pine trees.

In the future, when Alex is older, we will take the shuttle. Many of the lots were full (the Logan Pass visitors center was like the mall parking lot at Christmas time), so if we wanted to hike we would not have been able to due to lack of parking.

Click on the images below from our trip on Going to the Sun Road to enlarge the picture.

This historic site is located off of I-90 near Deer Lodge, Montana.

Johnny Grant, a Canadian, settled in the Deer Lodge Valley of Montana. This area was considered Flathead territory, but it was used as a route to hunting and trading areas by a variety of tribes. Mr. Grant’s marriages to women of several different tribes helped him settle in the valley peacefully.

Conrad Kohrs, a German immigrant, initially came to America in search of gold. He worked as a butcher’s assistant and soon owned butcher shops in many gold camps. (History has shown that very few gold miners got rich, it was the men who ran the supply shops that profited the most.) He partnered with Johnny Grant, who supplied cattle to Mr. Kohrs’ butcher shops. Conrad Kohrs later bought Johnny Grants’ ranch, the latter then returned to Canada.

Due to the large areas of land cattle would roam on the open range, cooperation was required among the ranchers of Montana and resulted in the founding of the Montana Stockgrowers Association. Kohrs’ half brother, John Bielenberg, was Kohrs’ business partner and expert cattleman. John Bielenberg managed the cattle empire and worked to improve the breeding of cow ponies and cattle. The cow ponies Mr. Bielenberg bred were famed for stamina.

After the death of Conrad Kohrs (1920) and John Bielenberg (1922), Conrad Warren, grandson of Conrad Kohrs, took over ranch operations in 1932. He worked to honor his family’s ranching legacy and and run the ranch with new methods. At the time Conrad Warren took over the ranch, only 1,000 acres and few hundred head of cattle remained.

The Grant-Kohrs National Historic site opened in 1977. There are blacksmith demonstrations, a chuck wagon to grab a cup of cowboy coffee (black, no cream, no sugar), and an area to practice your cattle roping skills. There are is a guided house tour and a variety of trails to hike.

This is a working ranch. There are chickens, cows, and horses.

We were surprised that the time of the open range was only three decades. The Homestead Act was the beginning of the end to ranches relying on open range. 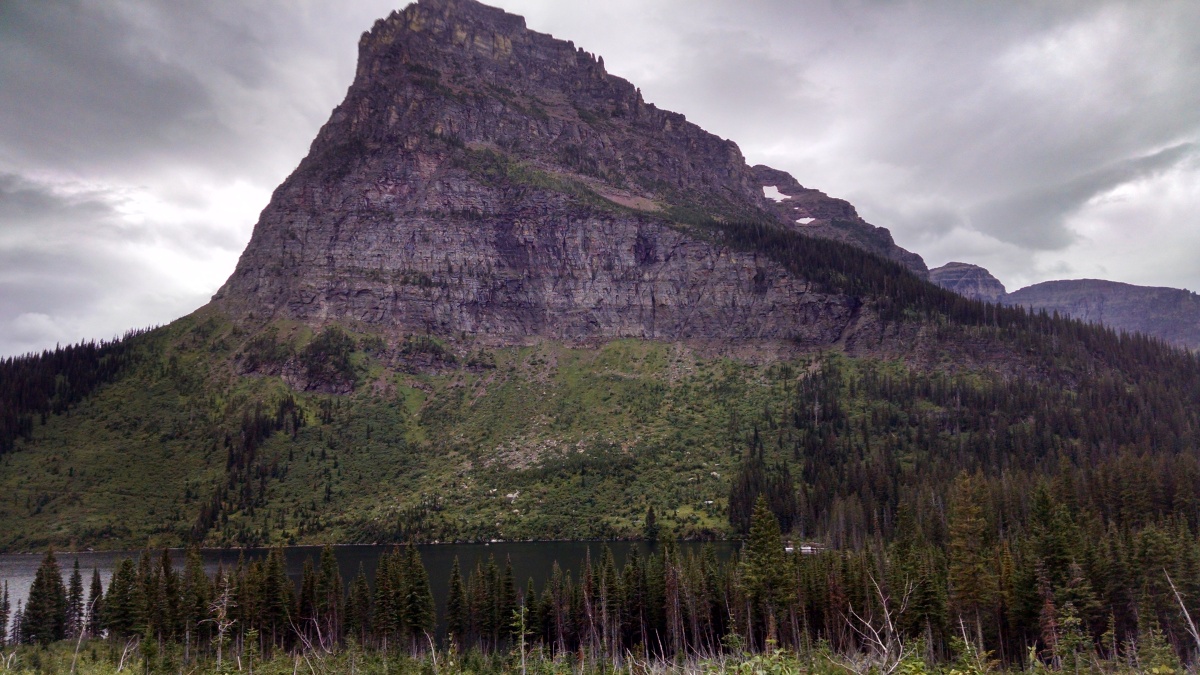 We enjoyed our hike around Two Medicine Lake, which was approximately 8 miles. If we had gotten an earlier start, we would have tried to make No Name Lake – there were reports of a moose spending the afternoon in the water. There was a boat that we could have taken from the General Store to the west end of the lake. This would have allowed us to hike trails up to the lakes, perhaps even Dawson pass.

The route we took resulted in a more gradual climb up to along the southeast side of the lake. The trail on the northwest side of the lake is not close to the water as one might think. It is actually up the mountain.

Click on the images in the gallery below to start slide show.

This recipe was adapted from Experimental Homebrewing. This recipe will require us to expand our techniques in making a cacao tincture and adding lactose at packaging. Ingredients marked with a * were substitutions from the published recipe.

Yeast was propagated in 1 L of media (0.5 c DME in 1L/~1qt water, boiled) in a 2L flask with stir bar that had been sanitized with boiling water. Media was inoculated from Wyeast Smack Pack. Propagation culture was grown at room temperature with stirring for 15 hours and was pitched directly into the cooled, oxygenated wort.

Sweet wort was brought to a vigorous boil and boiled for 90 minutes. All hop addition times are listed as time remaining in the boil. Target pellets – 60 minutes; Crystal pellets, and 1/2 tablet Whirlfloc – 10 minutes. After whirlpooling and allowing the trub to settle, the hopped wort was cooled to 20 degrees Celsius with a counter-flow plate chiller with a recirculating ice/water slurry. The hopped wort was oxygenated via an oxygen tank for 60 seconds. The yeast propagation culture (~800 mL) was pitched into the Speidel fermenter. The fermenter was placed in an incubator that was set to a maximum temperature of 20 degrees Celsius.

Primary fermentation was approaching completion at approximately 100.5 hours. Acetaldehyde was detected around 64 hours and was less noticeable at 100.5 hours. Green was transferred to secondary fermenter and was kept at 70 degrees Celsius for approximately 48 hours. The fermenter was then chilled to -2 degrees Celsius which will help precipitate proteins and any remaining yeast cells. The cold incubation proceeded for two weeks since we were traveling for vacation.

The beer was then transferred to a 1/3 keg. Also added to the keg were the specialty ingredients listed above. The keg was sealed, pressurized to 30 psi, and then rolled. Pressurization and rolling was repeated once. Tasting notes will follow.

We kegged the amber ale version 3.0 2 weeks ago before we left on our Northern Rockies adventure. We have rechristened it an Imperial Amber Ale; a higher extraction efficiency resulted in a higher ABV.

We are thrilled with the results of our first Colorado home brew. The color is a robust amber and the beer is clear. It is like looking through amber colored glasses. The head is white and generates lovely lacing as the glass is drained.

The aromas are of malt, dried cherries, with hints of floral and citrus. On the palate, this beer is malt forward followed by a mild bitterness. Despite the high calculated ABV, there is no alcohol burn when drinking this beer.

Only challenge we face now is reproducing this beer consistently. We hope we are wildly successful in that goal.

The monument is located on the Crow Reservation and is just off of I-90 near Crow Agency, Montana.

The battle of Little Bighorn/Greasy Grass was one of the last armed efforts of the Northern Plains Indians to preserve their culture. This battle was also where Custer and the five companies under his leadership, were wiped out.

The Indian encampment along the Little Bighorn River numbered approximately 7,000 people from the Lakota, Cheyenne, and Arapaho tribes. Of this number, there were approximately 1,500 to 2,000 warriors. The tribes were led by Sitting Bull and they refused to be restricted to a reservation, preferring a nomadic way of life.

Lt. Colonel George Custer’s decisions on the battlefield remain controversial. President Ulysses S. Grant criticized Custer’s actions, saying it was Custer’s folly and hubris that resulted in the massacre. It should be noted that Custer had implicated Grant’s brother in an Army supply price gouging scheme, had arrested Grant’s son for drunkenness, and was writing articles critical of President Grant. Grant, in turn, had Custer arrested and ordered to stand for court martial. Other army leaders blamed the incompetence of Custer’s subordinate officers for the massacre.

To further the complexity of the situation, Custer was believed to have entered a traditional marriage with Mo-nah-se-tah, daughter of Little Rock, a Cheyenne chief. This was rumored marriage was in addition to the marriage he had with Elizabeth Bacon, whom he married in 1864. Custer had also promised Stone Forehead (Medicine Arrows), a Cheyenne chief and Keeper of the Medicine Arrows, that Custer would never fight against Native Americans again. Custer also told his Native American scout, Bloody Knife, that if he was victorious in his last Indian campaign, he would run for president and use the power of the office to protect Native Americans.

How would history be different if Custer had kept his promise to Stone Forehead? If white settlers and the US government could have treated Native Americans with respect? We unfortunately will never know in this universe.

Click on a picture below to enlarge the image and enable the slideshow option.