We did not do this drive in one day. It actually took us two. We stopped and stayed at Mad River Rapids RV Park (clean, nice bathrooms, laundry, just a little too developed for our preferences) in McKinleyville, CA the night of June 21st. Cell reception was critical for the morning of the 22nd because Jess had a phone interview for a job. The saving grace of this stop was Six Rivers Brewery, just 5 minutes away from our campground. We enjoyed their beers.

Just south of Eureka, we debated on taking Mattole road along the lost coast. It is a beautiful drive; we have done it before in a rental car and motorcycle. However, it is twisty with lots of up and downs. We decided not to abuse Abby that badly a few weeks before our move to Colorado. We decided to enjoy the drive along Avenue of the Giants for the scenic portion of our drive.

History: Westport and Union Landing were towns supported by the lumber industry. A complex wharf and chute system was used to load the schooners anchored beyond the dangerous rocks with lumber, tanbark, shingles, wool, oats and railroad ties from the bluffs. The town struggled through boom and bust cycles, and the Great Depression diminished Westport further. The town survives today, unlike other lumber towns along the coast.

With our late start on the 22nd, we started to look for camping in Humboldt Redwoods State Park. We were shut out the previous night at Prairie Creek Redwoods State Park; this park is very popular and after hiking to Patrick’s Point, it was clear why. Make a reservation, it will be worth it. We were cautiously optimistic about finding a spot in Humboldt Redwoods. The Burlington campground, where we (minus Alex) camped in 2010 was full, and the park staff recommended Hidden Springs. This was a fantastic recommendation. We selected site 9, which was level and had a nice area for Alex and the dogs. There was some road noise, but the number of cars traveling on the road decreased significantly after dusk.

We got off to an early start on Thursday and as we drove by Westport Union Landing State Beach we saw campsites set up. We stopped to investigate and discovered that this is a first come, first serve campground. We snagged a spot for two nights. Initially, there looked to be a limited number of spots, but there are three camping areas. 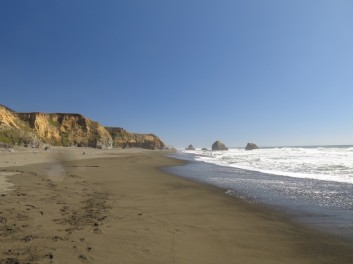 Westport Union Landing State Beach has, well, the beach. This can be walked to and at low tide you can find sand crabs, crabs, giant anemones, and mussels. Alex took a little bit to warm up to the beach and preferred to walk on the harder sand exposed during low tide. Once he discovered this surface, he was eager to run up and down the beach. The dogs were excited to frolic in the surf.

Fort Bragg is about 15 miles down the road. Fort Bragg is the home of North Coast Brewing Company and their very tasty beers. There is a tourist train, called the Skunk Train, that takes riders on a forty mile tour through redwoods and mountain meadows. We missed an opportunity to take Alex on a train ride that he would have loved. There is also Glass Beach, where beauty has resulted from a former city dump.

Overall: Fantastic camping spot. Need to be quick to grab a site. The proximity to Fort Bragg provides extra activities. We could have spend our entire trip camped out on the bluffs.